Recordings from the Åland Islands 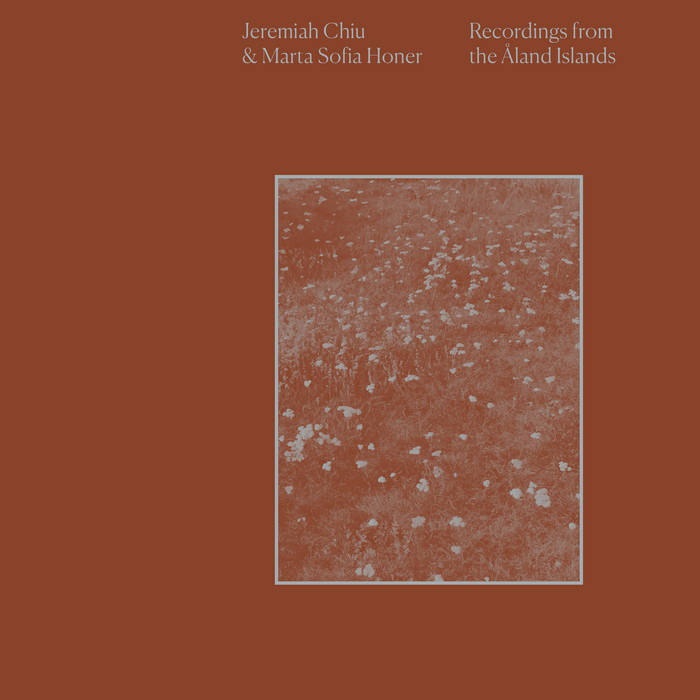 Charlie Moonbeam Glowing misty islands fade in and out of view

AD I listened with my eyes closed the whole time and was taken to a far away island in my mind. I love the bits of chatter and field recordings reminding you that the music is place-based and partly performed live; they’re a nice imprint from the creators. I think it’s easy to go the space-y route with synthesizer-heavy music but there are subtle touches (and viola ofc) to this album that make it feel decidedly terrestrial and intimate. Lovely all around.

ikkyu0 I love love love this album. I especially love how you’ve interwoven birdsong and chatter. These islands do appear to me out of the mist. Wonderful.

In 2017 Jeremiah Chiu & Marta Sofia Honer traveled together to the Åland Islands (an archipelago that is host to around 6,500 islands) in the Baltic Sea between Sweden and Finland. They headed to the islands with the intention of helping two friends (mother/daughter duo Jannika/Sage Reed) barn raise a small inn named Hotel Svala in Kumlinge (a municipality consisting of a small group of islands and a population of about 320). The idea was that, once completed, Svala would host artist residencies and workshop programs, creating a direct link between the islands and the USA.

The concept of recording music there came about as Honer & Chiu learned more and more about the islands. They were taken by the serene and strange quality of the place. The sun doesn’t set in the summer (and barely rises in the winter). The network of miniature islands is traversed by ferry which, according to Chiu, “casts a surreal horizontal movement through space and time, with islands shifting into and out of periphery, totally still and calm, yet always in motion.”

In 2019 they were awarded a grant from the Department of Culture to return and perform a concert at the Kumlinge Kyrka, a 14th century medieval church adorned with incredible frescos. The concert was recorded and became source material – along with improvisations on viola and electronics, pipe organ, pump organ, piano, synthesizers, field recordings and voice memos, all captured across both their trips at various locations on the archipelago – from which they meticulously crafted a post-script in the form of 'Recordings from the Åland Islands'.

Easing listeners into the feeling of the place, the album’s opening track “In Åland Air” is a dream-like haze that slows time, invoking the feeling of descending by plane onto the archipelago, a place Chiu recalls as “lush with a gentle, brackish breeze...” On “Snåcko,” a track named for the island next to Kumlinge, the music becomes a transportive portrait, painting in sound “the romantic and gentle atmosphere of the forests in Åland — a place where your eyes slowly adjust to the rainbow-colored moss covering granite boulders. Walking around, you find the forest floor blossoming with blueberries, currants, and flowers...”

The longest and darkest movement in the collection, “Archipelago,” encapsulates “the experience of being surrounded in the vast network of islands” with a dense cloud of slowly modulating string layers, improvised by Honer in an empty swimming pool at Svala. “The heaviness of the track,” says Honer, “is a reference to the deep darkness experienced during the Nordic winter days.” But the plaintive atmosphere of that penultimate piece is succeeded with the triumphant final movement of the album, “Under the Midnight Sun,” which bellows forth like a vibrant chorus of melodious sighs, echoing classic sounds from Jon Hassell’s 'Vernal Equinox', or Franco Battiato’s 'Clic', or Brian Eno’s 'Another Green World'.

Just as two eyes, two ears, and two halves of a brain work together to create a memory, on their duo debut, Honer and Chiu’s collective pallet produces a vivid three-dimensional hyperreality of painterly tones and textures – bright and kaleidoscopic, but with a deeply warm, earthen resonance. The music evokes a powerful sense of place, transporting and immersing listeners in the other-world of the Åland Islands. And though they achieve this in beautifully natural, organic manner, Chiu & Honer agree this album is quite unlike anything they’ve made before, and likely unlike anything they’ll make in the future.

The combination of modular synthesizer and viola is an uncommon one, but Jeremiah Chiu & Marta Sofia Honer manage to create a distinctive dyad that comes together with grace and truth. They’ve accomplished this by bringing much more than their respective axes to the table. Years of collaboration, cohabitation, shared experience, and separate but equally inspired commitments to utilitarian cultural work bind their disparate timbres together into a singular aesthetic reality.

The two artists met, appropriately, as members of a large ensemble performing Terry Riley’s “In C,” for an annual concert organized by Bitchin Bajas at Chicago modern music hub Constellation. Honer & Chiu had been living and working in Chicago for a long time, both active members of the notoriously interconnected improvisational and experimental music scenes, but they were somehow previously unintroduced. Chiu’s musical CV to that point included work with bands like Icy Demons and Chandeliers, but he was mostly known for his visual and graphic design work as Some All None. Honer had primarily worked as an instructor in Chicago, as well as a member of the ensemble Quartet Datura. In 2014, a year after their first collaboration, together, they decided to migrate to Los Angeles to continue developing their respective careers and crafts in sunnier climes.

Relocation to Los Angeles has proven to be fruitful for both artists. Honer has since become a first-call session player for the likes of Adrian Younge and Beyoncé. She’s also played on recordings by Chloe x Halle, Angel Olsen, Fleet Foxes, and Stanley Clarke, among others, including five recordings with Grammy nominations. Along with her session work, Honer is on the music faculty at California State University. Chiu has expanded his visual work in numerous capacities, in addition to becoming an active intersectional community organizer, and refocusing his musical practice to electronic music composition and sound art. He’s also become an Assistant Professor at Otis College of Art & Design; has exhibited/performed at The Getty Center, LACMA, and other distinguished locales; has become a resident programmer for Dublab; and has generated a strong unit of regular musical collaborators that includes Celia Hollander, Booker Stardrum, Ben Babbitt, Dustin Wong, Takako Minekawa, and Sam Prekop. Chiu has also designed album artwork for several International Anthem releases, including Angel Bat Dawid's Transition East, Dos Santos's City of Mirrors, Jeff Parker's Forfolks, and JP's Myspace Beats.

Recorded in various locations on the Åland Islands.

Processing on "In Åland Air" by John McEntire.

Additional field recordings on "Stureby House Piano," "Voices," and "By Foot By Sea" by Sean Pecknold.

Flute on "Archipelago" by Stephen Honer.

Edited and arranged in Kumlinge, Chama, and Los Angeles.

Mastered by David Allen in Portland.

Special thanks to The Hotel Svala.