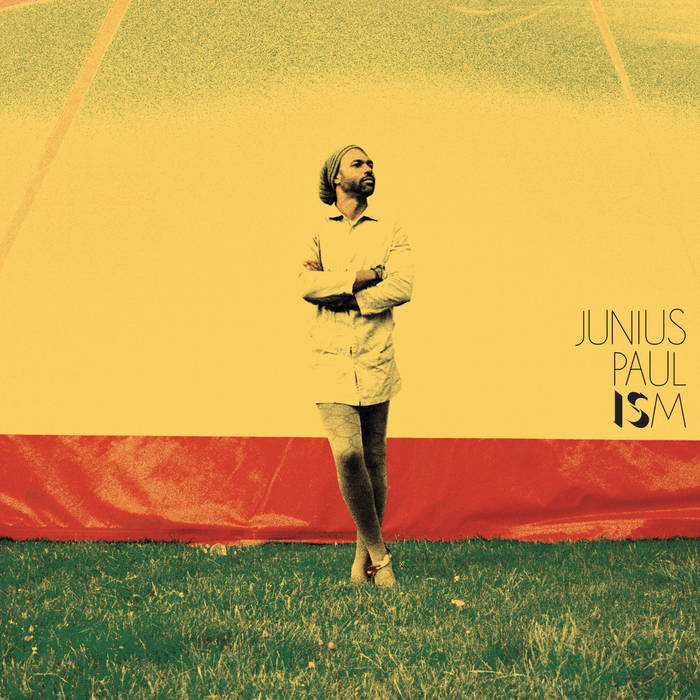 guska2 i love music that escapes categorization. You can feel the love for sound, the rhythm, the life.

Tresilaze Sometimes Ism makes me think my ears are lying to me because things are happening that seem impossible, like Dillard's first organ solo on Spocky Chainsey. That song is up there with the best of side-long epics of Miles Davis, or anyone else. Favorite track: Spocky Chainsey Has Re-Emerged.

Ism opens audaciously with the spiritual mic-check “You Are Free To Choose,” a track that features Junius Paul alongside Vincent Davis (drums), Justin Dillard (piano), and Corey Wilkes (horns).
This is by no accident. In many ways, “You Are Free To Choose” captures the spirit of Junius Paul’s artistic roots. Corey, Justin, and Vincent were among the multigenerational cadre of Chicago musicians present when Junius chose to follow his own path of creative discovery at the storied Velvet Lounge on the South Side of the city back in October of 2002.

Though the origins of his craft go back to playing in church, his creative instrumental voice really developed during jam sessions at clubs like The Velvet alongside members of the AACM, or Association for the Advancement of Creative Musicians. It was iron sharpening iron, the most natural form of knowledge transfer. He explained Velvet’s vibe in 2018: “It’s like in Africa.... If you had this society of diviners or medicine people, or you know, sages… The Velvet stuff is not secret; but there are certain aspects of it… if you weren’t there, you weren’t there.” The Velvet Lounge closed in 2010.

“It was very much like church. I had some unbelievable spiritual experiences there. You can feel this thing inside of you. There were moments at the Velvet Lounge that were so magical that I’d get scared. I remember a night with Vincent Davis. It was like, oh my God. He can play with that intensity for that long. The Velvet Lounge was the first time I experienced anything like that. I didn’t think that people could do that. And it scared me. You think you’ve heard [some things]… and then you hear something that completely destroys anything that you thought you knew.”

Back in the sixties and seventies, Chess Records’s Ter-Mar Studios was just a few blocks away from where The Velvet sat beginning in 1983. Chess was where some of Junius’s idols (like guitarist Pete Cosey and producer Charles Stepney) recorded some of his favorite albums. He sees himself as a part of that lineage. “I come from that... It’s special to be a part of that magic.” Junius still drives back to the club’s former location. “Every time I pass there” he notes, “the memories flood back.”

“Fred Anderson and a Half” and “Ma and Dad” were both were recorded at the first of two June 2016 sessions Junius led at Comfort Station (a historic trolley stop turned art gallery on Chicago's Northwest side). They both were also named in tribute to people who helped form him. “Fred Anderson and a Half” for the musician and proprietor of The Velvet, and “Ma and Dad” for his parents, who helped guide his musical journey from an early age. Both of his parents are musical, his father was at one time a DJ. Meanwhile, his stepfather was instrumental in introducing Junius to deep cuts by artists like Miles Davis and Jackie McLean, helping to shape his musical worldview. All of these influences are clear in the Comfort Station recordings. “For a while, I wanted [these sessions] to be the album,” Junius adds. “They are very unique,” and come “from the Velvet Lounge family,” featuring Junius alongside Tomeka Reid and Isaiah Spencer.

“Spocky Chainsey Has Re-Emerged” was recorded live one summer evening in 2016 at the Polish Triangle (the busy Chicago intersection of Division, Ashland and Milwaukee Avenue). The cut takes up a whole side of the LP, but stays lean, slinking and swinging for its duration. Junius notes that “the familiarity [of the players] showed itself… from playing together all of those years,” relationships that trace back to the Velvet.

“Baker’s Dozen,” featuring Isaiah Spencer on drums, Rajiv Halim on sax and Jim Baker on his outrageous ARP synthesizer, was recorded live at the second of the two Comfort Station sessions and flipped by Makaya McCraven, who highlighted the crunchy Funkadelic meets Water Babies funk of that session to great effect. Jim was a last-minute addition to the set, providing the backbone of what Junius calls an “unassuming headbanger.” Jim is also part of the Velvet Lounge Family.

But, of course, the spirit of the Velvet Lounge is not dead. “Tune No. 6,” recorded live at the Co-Prosperity Sphere in Chicago, is a sweet interlude here to remind us that jazz is alive and bristling with what’s yet to come.

“Paris” is another stand out track. It was born at The Hideout in Chicago, but developed (or “chopped”) by Makaya in Paris. The pair were working on a different project during the day, would head to a bistro for a meal (Junius favors duck confit and wine), then would work on edits at night. Junius notes that “Paris” is one for the clubs: “I want a 12” [extended DJ] cut!”

As Junius pushes forward as a creative musician, he is careful to carry with him the spirit and the knowledge he’s gathered from those who have come before him. He is very literally a bridge between generations of the Chicago vanguard, currently playing in Makaya McCraven’s combo and in the Art Ensemble of Chicago, in addition to fronting his own band.

One morning on tour with the Art Ensemble in Australia, Roscoe Mitchell called Junius’s hotel room and asked if he was coming to breakfast. He was. “That will never get old,” he shared with me on the other line. To play in the Art Ensemble of Chicago is the culmination of “a dream.” One that started at The Velvet Lounge nearly twenty years ago while watching his heroes. “What they taught me is that you can be yourself, as long as you’re badass at it.” Ism is a testament to Junius Paul’s journey towards himself. And he’s graciously invited us along for the ride.