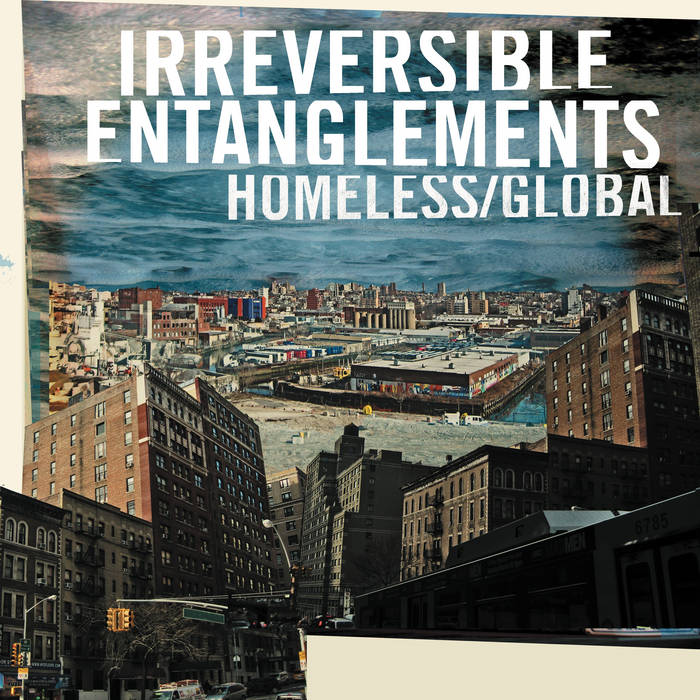 todd steed I woke up to this.

inga jesus f*cking christ these guys! they kill it EVERY time 🤯🤯🤯🖤🖤🖤🖤

The first new music from Philly/NY/DC free jazz collective IRREVERSIBLE ENTANGLEMENTS since their 2017 debut. “Homeless/Global” is an epic, 23-minute standalone “single” that foreshadows their forthcoming full-length LP (due Spring 2020).

A statement on the music, from the band: "As with the session for our first album, we began this session by just setting studio levels and hitting that record button. Homeless/Global was the first thing we played, no script, no plan. It’s a studio take that reflects what we do live: take the stage without a map, navigate the world in deep, telepathic, contrapuntal communion with each other and the histories we’re tapping into, push into the known and unknown, and arrive at the end together."

An unabridged take from the first moments of the Philadelphia recording session for their forthcoming LP, “Homeless/Global” stretches out inside a vacuum of time, running over 23 minutes in a blink of an eye. The track starts by falling backwards into an energetic recollection of Strata East swing, swelling forcefully till it bursts into the foreboding preach of poet/MC Camae Ayewa. In a wide-ranging poem touching on migration, exile, and border violence, she coolly inveighs: “in search of new bodies, we leave ourselves at home… plug into the network, socialize as a clone.” The band builds back up through a soaring statement by saxophonist Keir Neuringer (evoking an old-world zurna séance), before the rhythm section simmers down to a deep pocket of psychedelic groove held together by Luke Stewart’s mantric basslines and textured by Aquiles Navarro’s extended trumpet technique, as drummer Tcheser Holmes dances dynamically around a pulse and Ayewa runs down an inventory of Black history that “no one remembers.” “Homeless/Global” captures the essence of the band in improvisational ritual, and the increasingly powerful capacity for interdimensional transport they’ve collectively developed over 2+ years of hard hitting on the global live circuit.

IRREVERSIBLE ENTANGLEMENTS is a Philadelphia/New York/DC-based free jazz collective consisting of poet/MC Camae Ayewa (aka Moor Mother), saxophonist Keir Neuringer, trumpeter Aquiles Navarro, bassist Luke Stewart, and drummer Tcheser Holmes. Originally performing as two different ensembles at a Musicians Against Police Brutality event in 2015 (in response to the NYPD slaying of Akai Gurley), the five musicians recognized a shared ethos, and shortly after, assembled as a single unit for an impromtu studio date at Seizure’s Palace in Brooklyn. That session yielded their debut album "Irreversible Entanglements" (released by International Anthem & Don Giovanni in September 2017). Critical and communal acclaim for the album (including “Best of 2017” nods from NPR Music, WIRE Magazine, Bandcamp, and others) fueled a high demand for the band in the live setting, and the group have since spent much of 2018 and 2019 on the road. They have collaborated in performance with many legends of creative music including Amina Claudine Myers, Pat Thomas, and Nicole Mitchell; and their highest profile shows have included Pitchfork Music Festival in Chicago, Le Guess Who Festival In Utrecht NL, Barbican in London, and the Smithsonian in Washington DC.

Irreversible Entanglements’ new album will be released LP/CD/Digital by International Anthem & Don Giovanni in Spring of 2020.