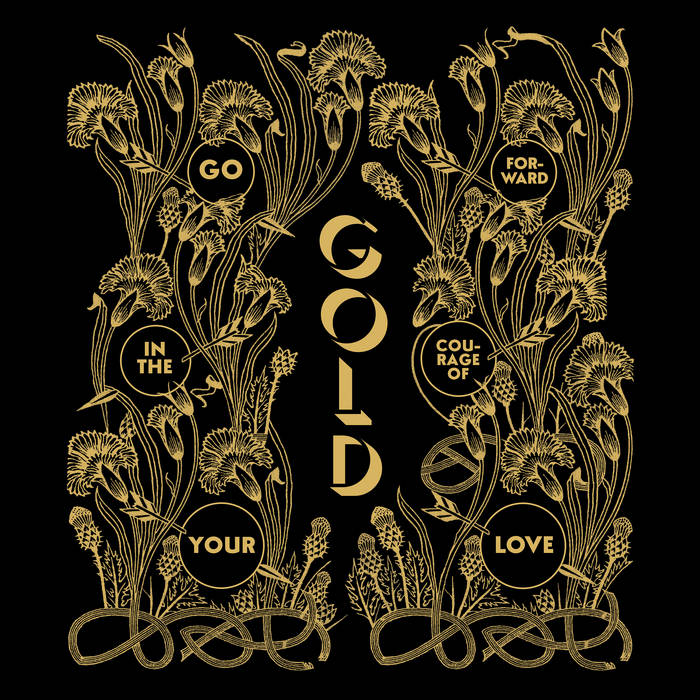 Paco Expansive jazz concept albums are always a gamble. Many are aimless and self-indulgent. Some are genius. This one is, creating a world I want to get lost in and never leave. Favorite track: Mrs Calamari.

Gerrit Wessendorf Pure gold. What a discovery! Love this album - now I have to find more :)

Andrew Jervis The last album was an absolute crutch during the lockdowns. Wouldn't it be nice if Gold's joyful noise led us out of this mess? Favorite track: The Sound Of My Feet On This Earth Is A Song To Your Spirit.

The lightning rod for Alabaster DePlume’s luminous follow up to the widely-acclaimed 2020 release To Cy & Lee: Instrumentals Vol. 1 was personal. “Someone was going through a thing,” says the Mancunian poet-performer. “I said, ‘go forward in the courage of your love’. And then I thought 'yeah, that's what I need to hear as well’.”

Gold is a sonorous double album that celebrates the communal act of making music and the relationships that can be explored when you purposefully avoid the standard way of doing things.

It contains filmic pieces that oscillate between the otherworldly and the trenchantly grounded, rendered maximally human through the recording process. There is laughter mid-track and studio chatter. There is the music of shouting and applause generated by a handful of people who were listening from the doorframe and the corridor. Complex vocal harmonies circle the songs like small birds and there’s an undercurrent of steely toughness, necessitated by the musician’s engagement with personal vulnerability and collective politics.

In late summer 2020 Alabaster DePlume (real name Gus Fairbairn) booked two weeks of sessions at the influential Total Refreshment Centre in London, recording to tape with Kristian Craig Robinson (aka Capitol K). He invited a different set of musicians each day, who would record the same tunes at the same speed so that DePlume – who produced the record – could cut them together later, like ingredients. “They didn’t have enough preparation to be able to hide behind this piece of material or skill,” he says. “They had to look up and respond to each other, and that’s what we've recorded.”

There were two rules that were essential to the process: that musicians wouldn’t be given enough time to rehearse and that they wouldn’t listen back to the music they recorded. “The method is part of the mission. It wasn’t like school. We had mayhem. We were having fun. That’s the story and the process – and I want to live that way,” he says.

The singer and percussionist Falle Nioke’s solo on “Again” is an example of the album’s unusual and liberating recording process. The tune was planned as an instrumental but Falle sang out spontaneously, and stilled the room with his arresting contribution. “He was just one voice in the choir but he suddenly sang lead because he felt it,” says DePlume. “It’s one example of what we were able to record,” he says, “because people felt genuinely personally welcome. Their own voices were made welcome. That is what this album is made of and it’s what the best things in our society are made of. We can either make people welcome or we can make them unwelcome; unseen.”

After the recording, the artist made a map, because frankly he needed a map after recording more than 17 hours of music. The map dictated which bits of each session to pull into the orbit of the record and it was drawn on a long scroll of paper with lines drawn across it, each line representing one analog tape. The triangles, dots and colors – red for fire, pink for beauty and blue for breath – shaped what emerged. The map has since been requisitioned for a gallery exhibition, and a photograph appears on the Gold artwork.

The music that emerged ranges from sparse understated bangers “Fucking Let Them” and the hypnotic pulse of “Visitors XT8B – Oak” to skilfully soothing instrumentals which will feel familiar to the many people who found To Cy & Lee a pandemic panacea (including Bon Iver, who sampled that album’s top track, “Visit Croatia”).

Gold opens with the Portuguese-titled “A Gente Acaba” which itself opens with the hum of voices, rich and human. There are gentle strings, gently strummed. The saxophone leaves vibrating trails in the air. “The Sound of My Feet On This Earth Is A Song To Your Spirit” is beauty and breath, generating the kind of deep warmth and connection that requires no lyrical explanation.

There is circularity. One piece of music arrives and leaves repeatedly, and a phrase is repeated:

I have all I need for the glory of being. I recognise you and celebrate. I am brazen, like a baby, like the stupid sun and I go forward in the courage of my love.

“I’m Good At Not Crying” is a self-accusatory lullaby that lists out the things he excels at (not eating much, not being the bad guy) whilst plaintive and harmonically-rich singers spill and spiral around the low tones of his voice.

On “People What’s The Difference” he unpicks the selective deafness that surrounds the refugee crisis within a gentle punk-funk frame and towards the end, there’s a lament for the broken earth marked out with plucked strings and harmonies that dip in and out like sharp bells. Softness, in the hands of this Mancunian poet-performer, can be a weapon.

“The reason for To Cy & Lee was to help people have peace,” he says. “The reason to make Gold is to give people courage and love by putting myself in a situation where I had to bring courage and love. It’s how I made it, it’s what it’s about. It’s what we need next.”

Artwork by Raimund Wong.
Photography by Chris Almeida.
Scan of the map by Fabrice Bourgelle.
Layout and insert design by Craig Hansen.

Special thanks to Donna, Megan, and all the special ones. The people who contacted me directly about 'To Cy & Lee' (and my work in general) contributed to this album. The community of the Total Refreshment Centre, and Peach, International Anthem, Lost Map, Tucker & Yuppies Music, Smugglers, and countless others make this work what it is.