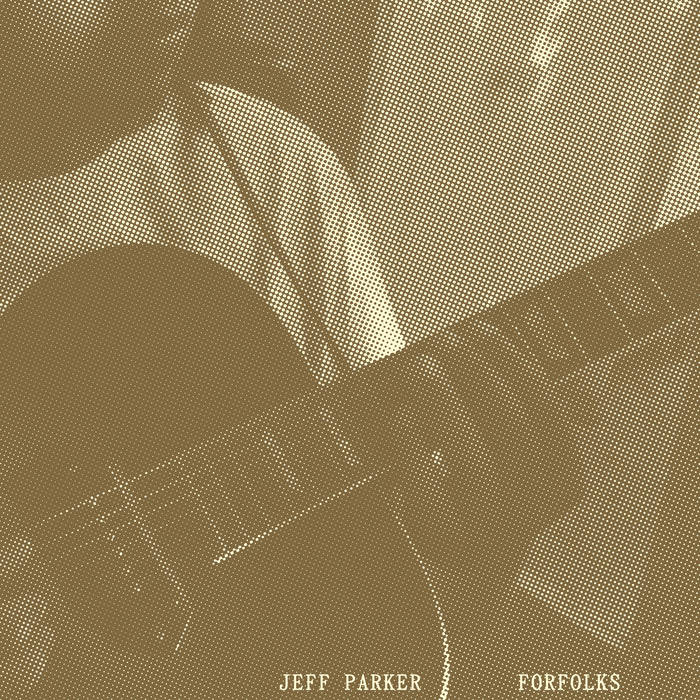 DerekC This is an extraordinarily beguiling and beautiful recording - just so original, I cannot think of anything else like it. It is only February, but this will easily be on my best of 2022 discoveries. We may ask, does the world need another solo guitar recording? - yes, it definitely needs this one. I love it.

stewart travers All these crazy people doing end of year lists before the Jeff Parker LP comes out :) This is one amazing LP. I can't pick a fave track.

onirapac One of my favorite musicians! Favorite track: Four Folks.

Years ago when Jeff and I were in a band together, I always insisted that our records could not have any liner notes. I was enthralled with the idea that imparting any information beyond the music itself was heresy. As if whatever the sound didn't convey needed to be left to the listener. Somehow, I was able to hold this opinion while simultaneously voraciously consuming every record jacket, CD cover, cassette J card and whatever else I could get my hands on regarding any music that interested me. Many years and finally the making of my own album forced me to confront my cognitive dissonance and recognize context can help the audience find their place in the art that they enjoy. That context is especially necessary when the artist is as under-appreciated yet influential as Jeff Parker.

When I met Jeff, he was the first adult (24 years old to my 18) whose musical taste was as broad as mine and my friends. He liked Eric Dolphy, De La Soul, ‘70s Miles, and Donny Hathaway. We first played together in the living room of my parents’ apartment. We agreed to each bring a friend to round out a group. He brought the amazing and criminally under-represented Sara P. Smith on trombone, and I brought my high school band mate Chad Taylor on drums. Chad and I were certainly outclassed that day, but nevertheless we all became fast friends. A few weeks later, at our regular jam session at the Bop Shop, I told my girlfriend (now wife) to pay attention to Jeff. "He's going to be important," I said.

The Chicago that Parker had moved to was ripe with young musicians eager to push at the boundaries. There weren't many venues catering to these new attempts at mixing things up, but slowly a number of great bands coalesced out of a group of like-minded friends, mixing everyone's backgrounds whether punk, disco, jazz or whatever. I clearly remember going to see New Horizons Ensemble at the Hothouse with Jeff, then a few weeks later going to the Empty Bottle to see Tortoise. Within months he'd be in both those bands. He was instrumental in forging a link between players with different styles that helped define the sound of creative music in ‘90s Chicago.

It's a particular thing to hear Jeff play solo. He is an unusually selfless improviser, often times laying out and highlighting the contributions of his band mates. He's never been one to play three notes where none would suffice. On this recording however he is by himself, joined only by his own ideas, looped or frozen, to flesh out the music he's creating in his mind. Hearing him craft entire sound worlds on these eight selections gives us an opportunity to really see how Parker orders sound.

He has been ordering sound with an amazingly diverse array of artists and collaborators for the past three decades. While it's common for a professional musician to be versed in many styles, that normally means a succession of genre tropes deployed to ensure the listener knows exactly where they are and what's supposed to be happening. A guitarist, for example, might play a Nile Rogers type rhythm on Disco or Funk, a favorite B.B. King lick on a blues or a Wes Montgomery phrase over a standard. Parker rarely does anything this overt. While perfectly capable (Once, in the studio, at the behest of a musician we were working with, I heard him take a solo that could have been an outtake from a Steely Dan album), he eschews genre playing and chooses a painterly approach to coloring the music, maintaining a deeply personal voice without weighing down the music with obvious stylistic maneuverings. His unique approach fits so well into so many contexts precisely because SOUND is his main focus and concern. One can clearly hear the breadth of Black Music in Parker’s playing. He is part of a continuum of musicians extending back to antiquity.

The structures here challenge our preconceptions of background and foreground. ALL the layers are primary. We are presented with fully integrated sonic developments rather than accompaniment, melody, or "soloing". Often times a solo album is an excuse for an artist to display their virtuosity. The idea being, possibly, that unencumbered by other musicians, the soloist is free to ride off on flights of fancy. But a career spent in the practice of subtlety is thankfully apparent in every song here. On Forfolks, a standard of the Great American Songbook fits comfortably next to multi-layered improvisations, a Thelonious Monk tune, and several compositions of Parker’s own, dating back twenty-five years.

Monk, I find to be an apt comparison. Both men were deeply involved in some of the most progressive musical movements of their respective generations, neither gaining much renown at the time, but both kept on doing things in their own quietly iconoclastic ways until the world caught up with them some twenty years later. I was fortunate enough to recognize the first time I heard Jeff Parker thirty years ago that I was witnessing something very special.